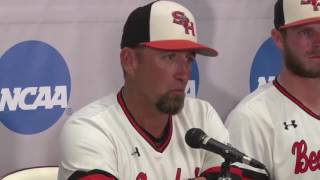 You’ve probably watched Sam Houston State’s Coach Matt Deggs’ speech, of June 11, 2017, from the postgame press conference after the Bearkats lost 19-0 to Florida State in the NCAA Super Regionals. It was a heartfelt display of what brought this team one step away from the College World series. It was the verbalization of a mindset of how faith and giving people second chances has changed his point of view as a coach. It was about coaching the players as humans, not simply

The Use Of Email Service Providers In Baseball Marketing

Glove Guru Aso: How To Break In A Baseball Glove

Baseball Should Have The Haka?

THE MAYWEATHER VS. MCGREGOR BATTLE MAY NOT BE OVER

Garoppolo Is The Highest Paid Player In The NFL